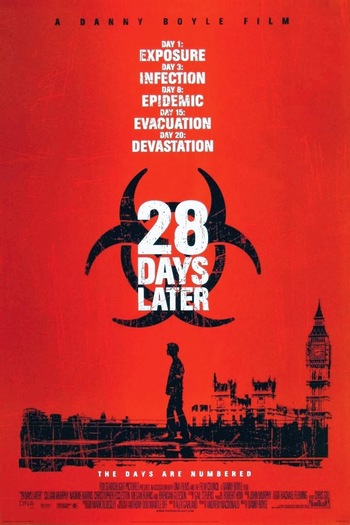 In this 2002 post-apocalyptic horror film directed by Danny Boyle and written by novelist-turned screenwriter Alex Garland, a literal hate plague begins taking over Great Britain after animal rights activists set loose an infected chimp in a lab at Cambridge University. While scientists had designed the "Rage" virus as a way of neutralizing violent impulses, it ended up having the opposite effect: once freed, the chimp starts to excarnify its would-be rescuers. Cue the cut-away.

Twenty-eight days later, Jim (Cillian Murphy) awakens from a coma; he finds himself naked in a totally deserted hospital (which sits in the middle of an eerily abandoned London) with a scarred-over head wound, an impressive growth of facial hair, and no idea of what's happened in the past month. Jim wanders around the city, plastic bag of Pepsi cans in hand, before he meets some non-shambling, angry-as-hell Rage-infected pseudo-zombies. After escaping their wrath, Jim teams up with a group of fellow survivors to kick some ass in search of an escape — and a cure, promised by radio broadcasts from a distant barricade.

Survivor Selena (Naomie Harris), a realist, considers survival the only option and thinks of Jim's naiveté as a hindrance. Frank (Brendan Gleeson) and Hannah, father and daughter, see things less bleakly — and both suffer for it.

The small group continues forth out of London in search of the promised cure, but when they arrive at the source of the radio broadcasts, their promised land turns into another nightmare...

28 Days Later avoids using the word "zombie", and it also avoids a number of common zombie tropes: once the Rage virus takes over, those infected with it become fast-moving, mindlessly violent killers (without a hunger for brains). Infectees are "transformed" almost immediately, preventing them from hiding their condition. The Rage infection itself devastates society and causes an apocalypse due to the ease of transmission and the overall panic. Despite precautions to avoid the appearance of a zombie movie, the film ended up getting pigeonholed as a zombie movie anyway. It did fairly well at the box office, received several comic-book prequels (which explore the period of time between the initial outbreak and the film), and managed to spawn a sequel (28 Weeks Later). The creators has planned a third installment in the series called 28 Months Later, but it has been stuck in Development Hell ever since the release of Weeks.

Not to be confused with 28 Days, where Sandra Bullock plays an alcoholic in a detox centre.