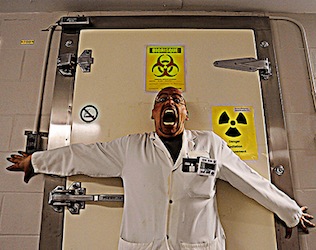 They often end up like this.
Dr. Rachel Scott: I was able to isolate the mutation in Niels' lungs that make him so contagious. And I introduced it to my vaccine. I injected myself with it about an hour ago, and then I breathed on an infected mouse, the same way that Niels used to breathe on people as a way to kill them. If this works, if the mouse survives, in effect I'll be able to breathe the cure onto people.
Commander Tom Chandler: And so will anyone else that I give this new shot to, which means that we won't need any more labs, any more infrastructure, or planes. All our problems will be solved. Except one. Did you do it?
Dr. Rachel Scott: Oh, God. Are you really asking me this?
Commander Tom Chandler: That's exactly what I'm asking you.
Dr. Rachel Scott: The man who killed five billion people, including your wife and most of your crew's family, is dead. And now his lungs are gonna be used to save the rest of the people on this planet.
— The Last Ship
Advertisement:

It's After the End, humanity is on the brink of extinction. In a remote outpost somewhere, one man is still looking to reverse this situation. He toils away in a laboratory trying to cure the disease, fix the Earth's Magnetic field, change the weather, or even build a time machine to go back and prevent the apocalypse.

The Sole Surviving Scientist needn't be completely alone, he might have some soldiers guarding him, a few survivors he's generously allowed into his stronghold, even an assistant. Regardless of his company he's the only real scientist left (that we know of). Can overlap with Crazy Survivalist, in which case expect some truly inspired "Home Alone" Antics with Death Traps.

Often the scientist's efforts are fruitless and he descends into depression, madness or a macabre obsession with studying mankind's downfall.

This trope is especially common in zombie fiction.