Film / Blast from the Past 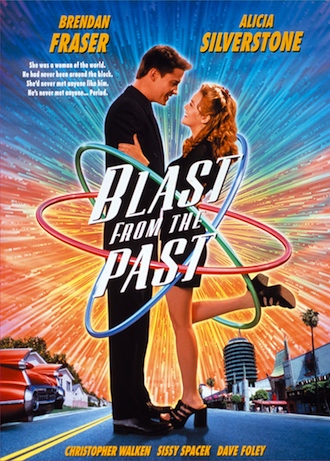 Imagine spending all your life in a fallout shelter, completely devoid of contact with the outside world. Now imagine that, after many years, circumstances force you to say goodbye to your former home.

No, this isn't that one video game; it's Blast from the Past, a 1999 romantic comedy written and directed by Hugh Wilson and starring Brendan Fraser and Alicia Silverstone.

The film begins in 1962. Like many Americans at this time, Dr. Calvin Webber (Christopher Walken) and his pregnant wife Helen (Sissy Spacek) are a little caught up in the tension of the Cold War; Calvin, a brilliant but off-kilter physicist, has built an elaborate bomb shelter under the backyard of their suburban Los Angeles home and stocked it with 35 years of supplies. When the Cuban Missile Crisis presents America with a very real and immediate threat of nuclear war, the Webbers move into the bomb shelter. As fate would have it, a fighter jet crashes onto their property while they're down there, destroying the house and leading the neighbors to presume the Webbers dead. Calvin—convinced that the explosion was the result of a nuclear missile, and lacking communication with the outside world due to having left the radio above ground—locks the vault door, sealing them inside for 35 years. Shortly afterward, Helen gives birth to a son named Adam.

Fast forward to The '90s (more specifically, 1999), when the vault unlocks. While Adam's parents diligently spent decades teaching him everything they could think of, this proves woefully inadequate for getting around in a radically changed surface world. Cue major culture shock when first Calvin and then the now-adult Adam (Fraser) venture out into the world to determine the state of "post-apocalypse" civilization.

Once it becomes clear that some people have indeed, umm... survived the blast, Adam sets out to gather supplies and find a (non-mutant) wife, so he can return to the shelter and seal it up again. Along the way, Adam meets a cynical young woman named Eve (Silverstone), who—after initially being seriously weirded out by him, and despite not knowing the details of his background—comes to see him as an eccentric but basically harmless young man. She agrees to help Adam with his goals, works with her gay housemate Troy (Dave Foley) to acclimatize him to the current times, and gradually finds herself falling for him.