Literature / The Boy on the Bridge 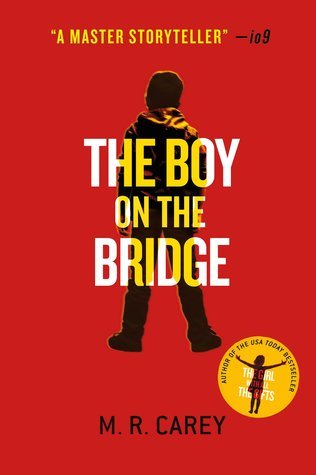 Dr. Fournier, in an inspirational speech, likens the crew to the wise men in the Bible who followed a star. Nobody else in the crew finds the analogy plausible or appealing. There are twelve of them, for one thing—more like the apostles than the wise men, if they were in the Jesus business in the first place, and they are in no sense following a star.
Advertisement:

The Boy on the Bridge is second book of The Hungry Plague series by M. R. Carey, and is a prequel, a.k.a Non-Linear Sequel to the first book, The Girl With All the Gifts. In T.G.W.A.T.G., the main characters stumble upon an abandoned mobile research facility/zombie-proof tank. This land leviathan is named Rosalind Franklin; the last act of the story takes place in and around Rosie. It is never explained how the vehicle came to be where they discovered it, or what happened to the crew who ventured out past the gates of Beacon in search of a cure.

To anyone who's read the first book, this novel is on some level a Locked Room Mystery.

To anyone interested in scientific discovery, it is about the desperate search for a cure to the Hungry Pathogen.

To anyone looking for a top-notch thriller, it is that too.

In the first chapter, it is revealed that one of the twelve crewmembers is pregnant ("...seven weeks into a fifteen-month mission...").

The Boy On The Bridge includes the following tropes: