Literature / The Girl With All the Gifts 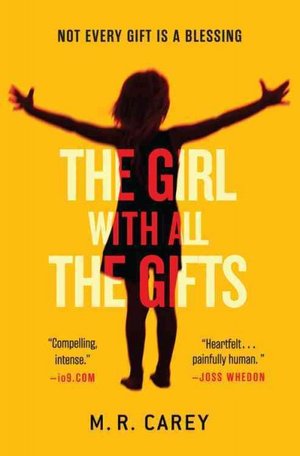 She just wants a hug!
Her name is Melanie. It means "the black girl", from an ancient Greek word, but her skin is actually very fair so she thinks maybe it's not such a good name for her. She likes the name Pandora a whole lot, but you don't get to choose. Miss Justineau assigns names from a big list; new children get the top name on the boys' list or the top name on the girls' list, and that, Miss Justineau says, is that.
Advertisement:

Melanie is a very special girl. Every day, a soldier comes to her cell and straps her in to a wheelchair and then wheels her to the classroom along with all the other children. And in the classroom, they are taught by Miss Justineau and other teachers (although Miss Justineau is the best). And then, after their lesson, they are wheeled back to their cells.

Aside from their cells, the corridor, and the classroom, Melanie and the other children have never been outside, but that's okay. They know that outside is a dangerous place filled with hungries.

The Girl With All the Gifts is a 2014 horror novel, and the first book of The Hungry Plague series by M. R. Carey, showing a quite different side of the Zombie Apocalypse.

It has been made into a motion picture that premiered late 2016.

Its prequel and Non-Linear Sequel The Boy on the Bridge was published in May 2017.

The Girl With All the Gifts includes the following tropes:

Alternative Title(s): The Girl With All The Gifts