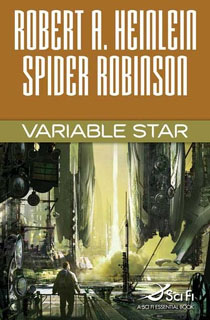 What do you do when the Grand Master of science fiction leaves behind incomplete notes on a book never written? Give them to the man recognized as his disciple and tell him to get cracking. The result is recognizably the product of two minds, begun before one was born and finished after the other died. It received mixed reviews. The basic structure of the story is very much that of Heinlein's juveniles, which is what Heinlein intended it to be when he plotted it; a young man goes to the stars, and there he finds himself. Much of the story is very much not that of a Heinlein juvenile; there's sex and drugs and the main character is a musician, not an engineer-slash-soldier of fortune. As Heinlein was plotting it during his time as a writer for teen sci-fi magazines, it's likely the other elements were added by Spider Robinson.

Joel Johnston knows what he wants: to be a musician, composer, and conductor; to study music on scholarship at a fantastic school; to marry his darling girlfriend Jinny. Unfortunately, things take a serious left turn and he finds himself fleeing the solar system on a Generation Ship leaving for the star Peekaboo. He loafs a bit, he drinks a bit, he sluts a bit; then things go seriously wrong.