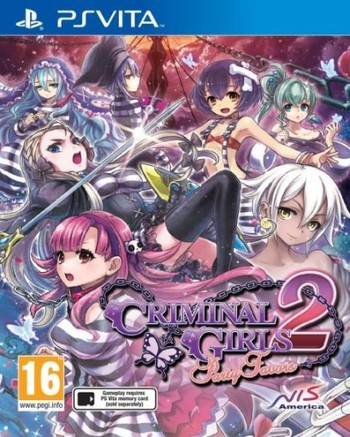 Criminal Girls 2: Party Favors is a turn-based, dungeon crawling JRPG developed and published by Nippon Ichi. It is the sequel to Criminal Girls: Invite Only.
Advertisement:

Players take control of an unnamed main character who is suffering from amnesia and finds himself managing a group of seven delinquent girls at the behest of his superior, Toko. He is tasked with motivating these girls, by various means, in order to overcome the trials of the Hell Spire, confront their sins, and reform so that they can return to the real world.

However, things go awry when Convicts, sinners who have been denied reformation, stage a revolt on the Hell Spire, abducting much of the personnel, including Toko, causing Hell Spire activities to cease. To make matters worse, there is a Convict hiding among the seven girls. Hoping to keep the Hell Spire from being sabotaged any further, Maya, another Program Instructor, sends the main character and his group straight to Hell. With nothing but occasional advice from Toko, the main character and the delinquents are forced to find their way back into the Hell Spire while constantly watching their backs for the Convict that got them sent to Hell in the first place.