Tropes on Science and Unscience 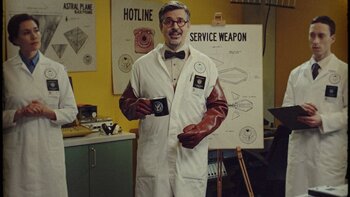 Stand back! Iz goin to do science.
"The cosmos is full beyond measure of elegant truths; of exquisite interrelationships; of the awesome machinery of nature."
— Carl Sagan
Advertisement:

Tropes on how science gets portrayed, represented or misrepresented in fiction.

In this context, "unscience" includes pseudoscience, misrepresentations of actual science and science that's not real or not really scientific. It does not include things that are not meant as science, such as regular magic. Nor does it include tropes about things that are unscientific, unless their being unscientific is part of the point or premise. Note that the tropes are not sorted by this divider. The overlap is too big, and often varies from setting to setting within the same trope.