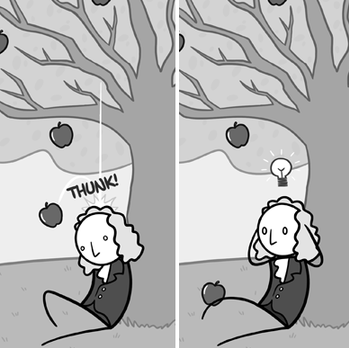 "Name the greatest of all inventors. Accident."
— Mark Twain
Advertisement:

Sometimes, accidents happen. But then there are times when a coincidence is just enough to create a scientific breakthrough, an amazing invention, an unprecedented discovery or something else that it's actually benefiting society.

It's a popular trope in comedy. A clumsy professor falls, drops something or makes a mistake, causing an unexpected discovery to occur. Just as often it's his bumbling assistant. Or just one of the protagonists, usually the stupid one. In some cases this accident turns out bad and causes a Freak Lab Accident. But in this case it actually turns out for the better! Another great scientific leap has been made and all due to something that seemed to be a mistake or an unintentional event.

This page is only for accidents that result in major discoveries or inventions in the field of science. For the cultural equivalent, see Accidental Art. Compare "Eureka!" Moment, Luck-Based Search Technique, Miraculous Malfunction, and Achievements in Ignorance.