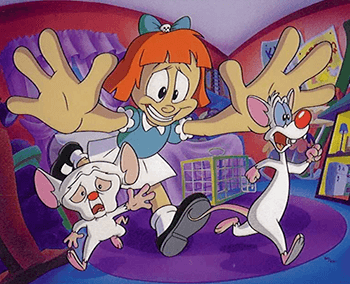 Any time you're involved in research that involves Animal Testing it's generally a bad idea to get too attached to your test animals. Most of the time your experiment will end with these animals being killed and dissected (and not always ...In That Order).

However often in fiction this little detail is ignored and scientists are shown treating their test animals like pets, naming them and even playing with them or petting them. If the animal dies it is a freak accident and the scientist involved is usually filled with remorse.

Since these animals have been experimented on, they may sometimes be an Intellectual Animal, Uplifted Animal, Nearly Normal Animal or Talking Animal.