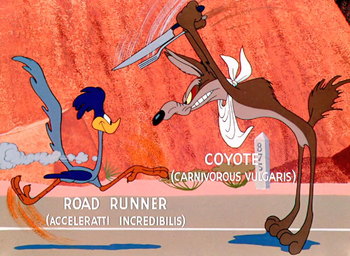 Left to right: Geococcyx californianus and Canis latrans. But that's not terribly funny, is it?
"And here we are, in the natural habitat of the Moobus gelatinous, spending today as he does every day, sheltering himself from responsibility. But what's this? It seems a nearby Kickbuttus hystericus is returning from a successful hunt."
— Gumball (referring to his parents), The Amazing World of Gumball, "The Tape"
Advertisement:

Now, if you look over here, you will see that we have an example Tropinius autodescriptans which was recently mounted for display. Note the fine Latinate canines. As you can see, this particular T. autodescriptans is of the schisomates subspecies, which is believed to have split off from the parent C. latinicus some time in the mid-18th century...

Or put another way, Canis Latinicus (or at least Gratuitous Latin) as specifically applied to ersatz species names, used either to make something sound scientific or to poke fun at such uses.

In biology, the formal naming system used for describing species is known as binomial nomenclature (that is to say, "naming using two names"). It was developed by the Swedish naturalist Carl Linnaeusnote this version of his last name is itself Canis Latinicus; one of his ancestors, upon becoming a clergyman, took a Latinized version of the family name. Carl himself was later ennobeled, and took the surname "von Linné in the early part of the 1700s as part of the larger system he created for classifying organisms. extended explanation His system grouped animals by their observed similarities (which later work refined into grouping by their presumed common descent, a la Darwinian evolution) with the groups at the top (originally 'Animalia' and 'Plantae') being the broadest and each successive level branching out to more specific groups until finally reaching the generic (genus) and specific (species) categories whose names are paired to form the 'official' name of the kind of organism. Linnaeus himself gave names to thousands of species and genera (as well as the families, orders, classes, phyla, and finally kingdoms which they were grouped into) in this manner, and all of the names he chose were composed of either Latin roots, or Greek ones, or some combination of the two. For example, his name for human beings is Homo sapiens, which is the Latin for 'wise man'. It has since been customary to form new names from Latin or Greek roots when describing a newly-discovered creature, but it isn't required. The only real rules are that the name be given in the form Genus species (that is, with the generic name capitalized and the specific name lowercase); that it doesn't duplicate a name; and that the first name given (if the organism is 'discovered' by different people at different times) has priority, so long as everyone agrees that it is valid and can come to a conclusion about where it fits in the 'tree of life' (which is not nearly as straightforward as it sounds). It is preferred that the name describes the organism, but it isn't enforced, and even when it is, the use of Greco-Latinate roots (or even roots from unrelated languages, such as classic Sanskrit or modern Mandarin Chinese), or even just Latin sounding roots, can make it hard for someone unfamiliar with the roots to guess what it means.

Discovering and describing a new species is Serious Business, but part of that business is getting a chance to put your personal mark on scientific history by choosing the species name, so a certain amount of whimsy is allowed. As a result, Binomium ridiculus is often Truth in Television, as the discoverers can use almost anything that suits their fancy: place names (usually where the specimen was found, but not always), names based on the discoverers' names, names of the expedition's patrons, names of famous individuals who have some tenuous resemblance or connection to the organism, anything.examples  Hallucigena sparsa (a fossil so strange it was described as resembling something seen during a drug trip); Kiwa tyleri (named for the discoverer, Paul Tyler; for double fun, the common name in English is 'Hoff crab', because its large mats of cilia are thought to resemble David Hasselhoff's famous rug of chest hair); Tullimonstrum gregarium ("Tully's Monster", a common but puzzling fossil invertebrate which has long defied classification); and Agra schwarzeneggeri (named for its well-defined musculature which is described as resembling Arnold Schwarzenegger in his prime). For example, The Other Wiki has a Long List of species named after celebrities

Given all of this, it is natural for writers to make fun of these sorts of names, or at least mimic them when trying to sound smart.

Sub-trope to both Canis Latinicus and Gratuitous Latin. Sister trope to Whateversaurus, which often uses a Binomium ridiculus for the dinosaur's name. Often part of a Wildlife Commentary Spoof. Authors who are being fast and loose with scientific accuracy may apply this as Techno Babble to make their absurd claims seem like less of an Ass Pull.

Bia's pop-up book has an anaconda listed as anacondus giganticus.

Bia's pop-up book has an anaconda listed as anacondus giganticus.