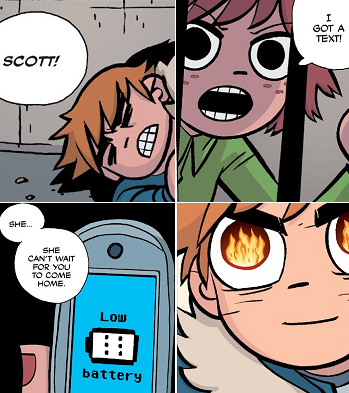 Neo: Morpheus. The Oracle... she told me I—
Morpheus: She told you exactly what you needed to hear. That's all.
— The Matrix
Advertisement:

Sometimes, the good guys get into a real jam where nothing seems like it's going to save them. Maybe The Hero is getting his butt kicked by The Rival or the Big Bad. Maybe there's some kind of impassable barrier between the hero and his objective, or some kind of mind bending riddle has bogged them down. Whatever the case may be, it doesn't look good.

Then someone like a friend who's a Guile Hero, the Cynical Mentor or The Lancer comes along, and tells the hero a lie that gets them fired up with a fresh batch of Heroic Resolve. Maybe he tells the hero that the Big Bad killed the hero's parents, despite the fact the bad guy wasn't even in the country that night. Maybe you say that the Femme Fatale is waiting naked on the other side of the obstacle if the hero can just get through it, or that the world's greatest chef will make the hero's Trademark Favorite Food if he figures out the puzzle.

Wouldn't you know it, the hero suddenly manages to turn the tide and start kicking ass.

Although the person telling the lie usually isn't thinking beyond the short term goal of overcoming an immediate problem, sometimes (especially in the hands of a prophet) this is done with a long term goal in mind, such as forcing Character Development or some other change in behavior or nature. In these cases the lie may even become a form of Prophecy Twist.

A Motivational Lie can also be a deadly weapon in the hands of a cunning villain, who can use it to either manipulate the heroes or turn others against them, such as in a Let's You and Him Fight scenario. As such it can be a favorite weapon of the Manipulative Bastard, Magnificent Bastard, and The Chessmaster.

See Inspirational Insult when taunting is used to get the same result. Compare and contrast with tropes such as Batman Gambit, Magic Feather, Lying to Protect Your Feelings, Blatant Lies, Wounded Gazelle Gambit, Unreliable Expositor, Metaphorically True, False Reassurance, and Let Them Die Happy. Closely related to the Placebo Effect.

Snowball tries to turn Pinky against the Brain.

Snowball tries to turn Pinky against the Brain.