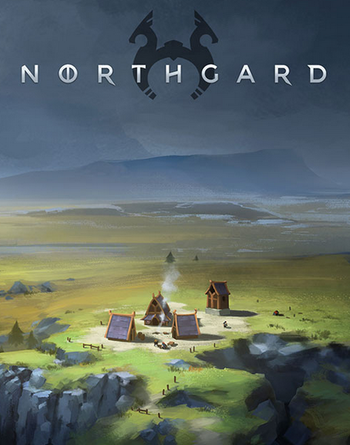 Northgard is a city-building and RTS game developed by Shiro Games, in which you take the on the role of a Viking clan leader, who, after years of tireless explorations, has discovered a new land filled with mystery, danger and riches: Northgard. There are currently fourteen clans to choose from:
Advertisement:

After choosing your clan, you will have to conquer and tame Northgard, enduring harsh winters and defeating rival clans along with other enemies ranging from dire wolves to undead warriors. Players start on a map divided into tiles that the player must explore to reveal. Each tile will contain valuable resources, enemies, or unique features that can aid your clan. Players must colonize tiles to work resources and gain an edge over their rivals.

There are five ways to win the game:

After roughly a year in early access, the game was released on March 9, 2018. Besides the usual single-player skirmish and multiplayer, the game has two other modes:

A Kickstarter campaign for The Board Game, Northgard: Uncharted Lands was held in 2020