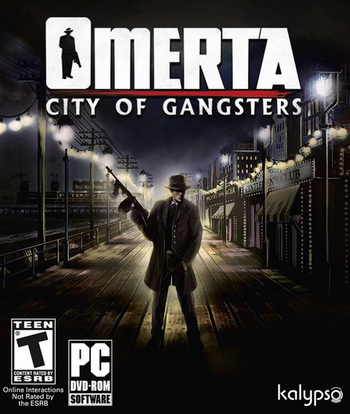 Omerta: City of Gangsters is a 2013 simulation game by Kalypso Media and Haemimont Games, released on PC and Xbox 360. Its plot follows a young Sicilian gangster who has just arrived in 1920's Atlantic City during Prohibition, and his quest to climb up and reach positions of power and wealth in the city's Mafia.
Advertisement:

The game is primarily a simulation game in the vein of Haemimont's game series Tropico, but the combat encounters found in the main missions, are resolved through a tactical Turn-Based Combat in the style of XCOM: Enemy Unknown.

The game later received a DLC expansion called "The Japanese Incentive", where the Boss deals with the Yakuza head Hikaro Eda and finds himself in a tragic romantic relationship with his trophy wife.