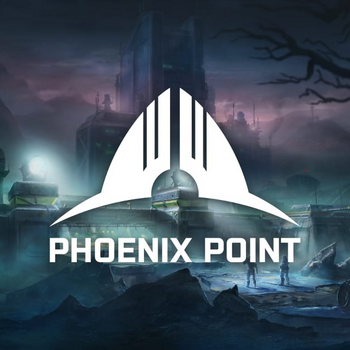 Sapere Audenote Dare to know.
"Therefore still their eyeballs shrink tormented. Back into their brains, because on their sense. Sunlight seems a bloodsmear; night comes blood-black; Dawn breaks open like a wound that bleeds afresh. Thus their heads wear this hilarious, hideous. Awful falseness of set-smiling corpses. Thus their hands are plucking at each other; Picking at the rope-knouts of their scourging; Snatching after us who smote them, brother, Pawing us who dealt them war and madness. "
— Mental Cases, Second lieutenant Wilfred Owen, British Soldier and Poet
Advertisement:

Phoenix Point is a Turn-Based Tactics game developed by Snapshot games. Several team members worked on the original XCOM title, including franchise creator Julian Gollop himself. The game was released on December 3, 2019 for the PC.

Taking heavy inspiration from X-COM: Terror from the Deep, the works of H. P. Lovecraft and the Sci-Fi Horror films of John Carpenter, Phoenix Point is set in a bleak world. In 2022, the climate change-induced melting of the permafrost layer has awakened a mysterious virus dormant inside the ice. The so-called Pandoravirus infects all it touches, whether it be plant, animal, or human, and twists it into something alien. The sea was the first to be consumed, as a strange mist fell over it, which soon spread to land. Nameless abominations began pouring from the murky depths of the ocean, and civilization soon collapses against a mixture of monsters and World War III. By the year 2047, humanity has been driven to the brink of extinction, now only existing in small, guarded communities, isolated havens, and secretive para-military organisations.

That's where the Phoenix Project comes in, an organisation composed of numerous cells, each with radically different ideologies. It's up to the scientists, engineers, and soldiers that compose the groups, to figure out a way to eradicate the alien menace, and save the human race from complete assimilation.

The player leads one of these cells, and engages in diplomacy, and conflict with the other remnants of humanity, all the while fighting a desperate, all-out war against the abominations spawned by the Pandoravirus, and other, darker, more ancient monstrosities.

Combat is in many ways similar to the modern XCOM games, but also in many ways different, and in fact draws a lot of inspiration from the original XCOM games. While it is still a grid-based Turn-Based Strategy, actions are still regulated by Action Points, and the player and enemie units take turns as a team, the intricacies of combat are more involved and complex than the modern games; rather than attacks being single shot affairs with a dice roll to hit, weapons fire consists of appropriate volleys of shots, with different accuracy, ROF, and damage ratings, and aiming can be done freeform from a first-person perspective to land precision shots. Pairing with this is a Subsystem Damage system, allowing shots to, for example, cripple legs or destroy enemy weapons. Armor is also tied to this system, meaning strategy often depends on breaking, penetrating, or just outright bypassing armor to deal effective damage. Logistics in battle are not quite so easy here - no Bottomless Magazines, for one - and items are much more individualized and consumable, meaning more thought is needed to effectively kit out units. Overall, Phoenix Point is a bit less newbie-friendly, but offers a deeper, more tactical experience that allows for a much greater freedom of approach.

There are also a number of short stories on the official site, released before the game itself.