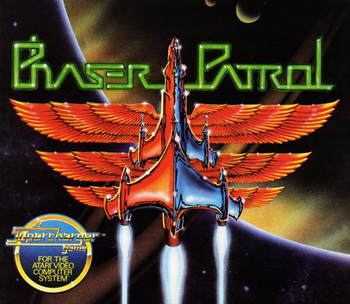 Phaser Patrol is a first-person Shoot 'Em Up for the Atari 2600, released in 1982 by Starpath for their Supercharger. Written by Dennis Caswell, and based on Star Raiders, it's considered one of the 2600's best games.
Advertisement:

The plot is an excuse about aliens called the Dracons invading the Human Federation. You fly a ship armed with Phaser Torpedoes (guided missiles) and you have to kill all the Dracons.

The game has two main screens, selected with the left difficulty switch. The Sector Map screen shows you a grid of 36 sectors. You are in one, two of them are occupied by friendly starbases, and most of the rest are unknown; they could be empty, or occupied by Dracons. You move the cursor to a sector and press fire to 'warp-hop' to that sector. You can warp to any sector, but longer warps take more energy.

The Combat Action screen is where the fighting happens. You have a first-person view, and in the center of the screen is your torpedo sight, with a rangefinder. You watch the Dracons approach on radar, and once they are within range, open fire. If the Dracon is inside your sight when you fire, the torpedo will home in; if it's outside, the torpedo will fly straight ahead. The sight is small, and the Dracons move around a lot, so it's hard to stay on target.

There is also a status bar at the bottom, showing shield status (on or off), equipment status (normal, damaged, or destroyed), the radar screen, your energy level, and messages.

The Dracons come at you two at a time, and shoot torpedoes at you. Your shields, computer (for radar and torpedo targeting), long range scanner (for seeing what's in neighboring sectors) and torpedoes can all be damaged or destroyed. At some point, if they keep hitting you, your ship will be destroyed altogether. Best to warp to a starbase if you start taking damage; there you get full repairs and energy.

When the game ends, whether you win or lose, you get a ranking based on your performance.