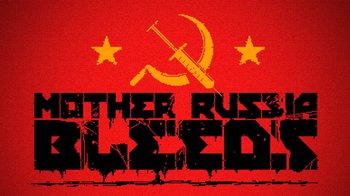 Mother Russia Bleeds is a side-scrolling Beat 'em Up developed by Le Cartel released in 2016 and published by Devolver Digital. It is a deliberate throwback to old games of said genre such as Streets of Rage or Final Fight, mixing it with the ultra-violence and 1980's aesthetics of Devolver's own Hotline Miami, in which you must beat up waves of junkies, gangsters and other dangers with your fists and any weapon you can get your grubby mitts on.

Taking place an alternate universe version of Soviet Russia, the game stars four Gypsy pit-fighters: Sergei, Boris, Ivan, and Natasha as their encampment is besieged by the Bratva while they are taken to become guinea pigs for the new street drug Nekro. Waking up, they find that they are now addicted to said drug and must fight their way across the Motherland in hope of seeking out an answer to what happened and vengeance to who did this to them, all the while trying to keep the drug from completely consuming them.

The game's unique mechanic is based on Nekro, which the players can use to either heal themselves or to enter a berserk state. In order to refill their supply, they must drain them from other addicts, who after defeat will convulse on the ground before they die.