Video Game / Nelke and the Legendary Alchemists: Ateliers of the New World 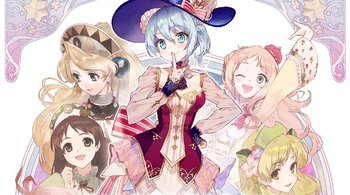 The heroine and some of the legendary alchemists note From left to right: Viorate, Marie, Nelke, Meruru, Ayesha.
Advertisement:

Nelke and the Legendary Alchemists: Ateliers of the New World is a Spin-Off of Gust's Atelier series of Role Playing Games released on PlayStation 4, Nintendo Switch, PlayStation Vita, and Steam on January 31, 2019 in Japan and March 29, 2019 in the rest of the world.

Nelke von Lestamm, daughter of a family of nobles, seeks the legendary Granzweit Tree, which is said to grant great power to whoever finds it. Hearing a rumor that the tree can be found near the frontier town of Westwald, she sets out to find it — but in order to do so, she must also become Westwald's governor and help develop the village. Unfortunately, she does not possess the gift of alchemy: in order to create the items and materials needed to expand Westwald, she will need to recruit the help of the legendary alchemists. These legendary alchemists also happen to be the protagonists of previous Atelier games.

Nelke and the Legendary Alchemists distinguishes itself from the rest of the series by adding a strong emphasis on town-building: players can choose which buildings to make and where to place them, allowing them to customize the town to their liking.

Alternative Title(s): Nelke And The Legendary Alchemists Atelier Of A New Land