Born Under the Sail 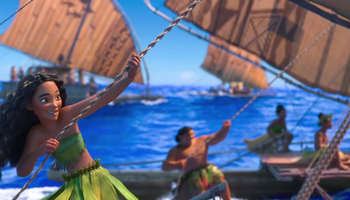 Come sail away with meeee!
"The ironmen live their whole lives at sea."
— Aurane Waters, A Feast for Crows
Advertisement:

A culture whose hat is their skill at sail, whether through literal seafaring and shipbuilding in oceanic or riverine environments, being a spacefaring species known primarily for spacefaring when Space Is an Ocean, or traversing the skies when The Sky Is an Ocean. In some cases, they may be born and spend their entire lives at sea without ever touching dry land. By necessity, they often tend to double as a Proud Warrior Race and/or Proud Merchant Race. They often have a powerful navy, and may also engage in piracy, but aren't limited to those roles.

It's common for these groups to be Fantasy Counterpart Cultures inspired by historical peoples with strong maritime traditions. In particular, the Polynesians and the ancient Norse are common inspirations.

A variant of this trope places the sailors in a freshwater, rather than oceanic, setting. This typically manifests as river nomads, living in houseboats and wandering up and down the branches of large river systems.

This trope is a common feature of Ocean Punk settings. The Cool Boat is probably a feature. Wooden Ships and Iron Men may be involved, if they lean in that aesthetic direction. A related skill is that of The Navigator.

Often a variant of a Wandering Culture.