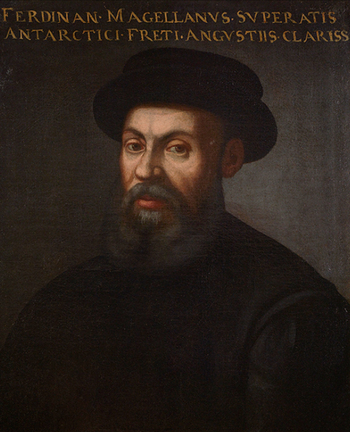 Ferdinand Magellan (Portuguese: Fernão de Magalhães, Spanish: Fernando de Magallanes, February 4, 1480 - April 27, 1521) was a famous Portuguese navigator and explorer who planned and led the first circumnavigation around the world in history (though sadly he died mid-way through it).

He was born in Sabrosa, Portugal, to a family of minor nobility. As a teen, he and his brother Diogo served as pages at Queen Leonora's court in Lisbon. While there, Magellan was exposed to stories of the then-raging Portuguese and Spanish rivalry for sea exploration (which was kicked off by the contemporary discoveries of Christopher Columbus) and dominance over the spice trade in the East Indies, especially the Moluccas, then also called "Spice Islands", modern-day Indonesia. The promises of fame and riches had Magellan develop an interest in sailing and maritime discovery.

In 1505, Magellan enlisted in the fleet of Francisco de Almeida, the first viceroy of Portuguese India, whose expedition King Manuel sent to check Muslim sea power along the African and Indian coasts, and to establish a strong Portuguese presence in the Indian Ocean. Though chronicler Gaspar Correia stated that Magellan acquired considerable knowledge of navigation during this period of his Indian service, little is actually known of Magellan's first years in the East until he appeared among those sailing in November 1506 with Nuno Vaz Pereira to Sofala on the Mozambique coast.

After 1512, when coming back from Malacca and motivated by letters from a fellow navigator-explorer friend of his, Francisco Serrão, he entertained the idea of reaching the Moluccas westwards, and obtained support from the Spanish crown.