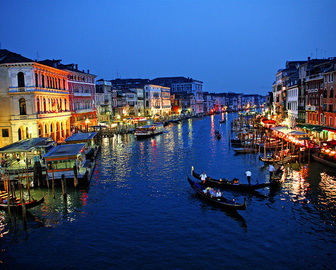 Venice's Grand Canal, right opposite the train station, as seen by dusk.
ONCE did she hold the gorgeous East in fee;
And was the safeguard of the West: the worth
Of Venice did not fall below her birth,
Venice, the eldest Child of Liberty.
She was a maiden City, bright and free;
No guile seduced, no force could violate;
And, when she took unto herself a mate,
She must espouse the everlasting Sea.
And what if she had seen those glories fade,
Those titles vanish, and that strength decay;
Yet shall some tribute of regret be paid
When her long life hath reach'd its final day:
Men are we, and must grieve when even the Shade
Of that which once was great is pass'd away.
— William Wordsworth, On the Extinction of the Venetian Republic.
Advertisement:

Ah, Venezia, the famed City of Canals, the haunt of lovers, and of beauty. The Serenissima, the Jewel of the Adriatic. Well, that's not all it was. The fact is that Venice was one of the most successful states in Europe, with a history of independence spanning over a thousand years. In its heyday, it was powerful enough to stand up to empires much larger than itself, thanks to its centuries-long dominance of trade in the Mediterranean as well as cunning and diplomacy. And—let's not kid ourselves—walls made of water and wood, which are much better than walls of stone.

According to popular legend, Venice was founded by refugees from the fall of Rome. They fled to the swamps where none of the Barbarian Tribes could get at them and set up a series of small communities that would later be combined into the city of Venice. Somewhere around 8th century AD, they elected their first doge, or leader, and thus lay the foundations of their republic.

By the end of the 10th century, Venice was renowned far and wide for their acumen as merchants and their expertise in the fields of navigation, ship construction, and naval warfare. It was also known for its mastery of the the medieval version of cutting edge technology, most famously its glass manufacturing, and for "the Arsenal" - a navy yard which could, on word from the Senate, make hundreds of galleys ready for battle in a few weeks.

Venice grew until it became a small empire manipulating The Crusades to its benefit, most famously when it particpated the sack of Constantinople during the Fourth Crusade. This brought Venice to its height. It was about then that Marco Polo made his famous expedition.

In later times the growth of gigantic Empires like the Ottomans and the Habsburgs forced Venice into a decline, and the discovery of the New World hurt its trade. Venice was able to survive by its cunning and its Navy, which was still feared. However, it slowly declined and developed a reputation more in keeping with modern associations than with war galleys and intrepid merchants. Its final end as an independent state was something of an anticlimax, when Napoléon Bonaparte, while campaigning in Italy, extinguished it as sort of an afterthought, unilaterally bargaining it away to the Austrians in exchange for an armistice at Campo Formio. At that time the state of Venice had something of a reputation as a Decadent Court, though it is hard to tell how much of that was propaganda. What is definitely true is that it had lost its ability to exert much in the way of military power, and had largely devoted its economy to tourism surrounding its beautiful art, its lively musical culture, and its hedonistic party scene (especially the Venetian Carnival, still the highlight of the Grand Tour for young aristocrats from across Europe).

After The Napoleonic Wars, Venice became part of the Habsburg Austrian Empire, united with the old dominions of Milan as part of the new Kingdom of Lombardy-Venetia (of which the Austrian Emperor was King). During the Revolutions of 1848, the Venetians revolted against Habsburg rule and held out for over a year, but were unable to keep going and returned to the Habsburg fold. But after the Austro-Prussian War of 1866—in which the "Kingdom of Italy" (really just the old Kingdom of Piedmont-Sardinia with Lombardy and a few Central Italian territories attached) had allied itself to Prussia—Otto von Bismarck forced Austria to cede Venice to "Italy" to hold up his end of his bargain with the "Italian" government. Venice has been a part of Italy ever since.

Nowadays it is a popular tourist destination, famous around the world for its masks and the splendor of Carnival. During the COVID-19 Pandemic in 2020, with no more cruise ships or motor boating operating on the lagoon, the quarantine rendered the waters of the city's canals clear again for the first time in ages.

For a more general overview of the history and culture of Italy, see Culture Of Italy

Most tourists visiting Venice might be baffled as to why immediately across the lagoon there are massive chimneys belching black chemicals into the air. Travelers to the supposedly "romantic" nearby cities of Verona or Padua might be equally baffled to find the cities located in the middle of an industrial wasteland. The explanation as to why follows.

Most cities in northeastern Italy had spontaneously given themselves over to Venice’s protection during one of Milan’s periodic late-medieval conquering sprees. Their ruling classes were welcomed into Venice’s ruling nobility (eventually swelling the “great council,” whose membership was hereditary, to outrageous size). Thus, the holders of capital who in other Italian states would invest in their home city instead invested them in Venice. Despite this, the people of the lands Venice ruled never rebelled note  (although some disgruntled nobles did stage some coup attempts) , mainly because all the nobles were invested in business on the mainland in some way or other, and had an interest to keep the economy stable and the people happy.

These same disadvantages were turned into advantages in the 1970’s. After Italy’s postwar economic boom had petered out and the “Years of Lead” had set in (“Anni di Piombo”) northeastern workshops began supplying well-made niche goods at cutthroat prices. In grey towns where the only thing of beauty might be the villa of an absentee landlord, the northeasterners had nothing to do but work. And work they did, slowly becoming the most powerful force in Italian industry. note  In 2003, the provinces of Padova, Treviso and Venezia had a GDP greater than that of Argentina. Now, every square mile of land east of Milan is packed with small family run firms. Oftentimes the CEO is the father, the CFO is the mother, the product designer is the daughter and the chief salesman is the son. note  (The actual factory work has been taken over by North African immigrants)

Sadly, Venice itself, once the chief city of the region, is now reduced to a sort of historical Disneyland. From a population high of 250,000 in the 1950’s note  (and over a half million in the Renaissance) today the city only counts some 20,000 inhabitants (the official population is much higher, as suburban towns keep getting annexed to the city’s jurisdiction so tax revenue can stay stable).

The stereotype in the Italian consciousness for northeasterners is that they are uneducated workaholics who bring along their wielding tools when they go on vacation one week a year (usually to the Caribbean or Maldives, but always in the wrong season). Typically, a northeastern entrepreneur as represented in the media will continuously vote for the Northern League, (“Lega Nord”) denouncing southerners and immigrants as lazy good-for-nothings, oblivious to the fact that he exclusively employs immigrants and southerners in his factory.

Ironically, recent judicial developments have shown that the Northern League is in the pocket of the Calabrese Mafia. However, they still retain a chokehold on the electorate in almost all of Northern Italy.