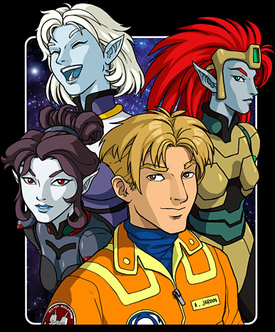 Clockwise from bottom: Alex Jardin, Tempo, Beryl, and Fireblade.
"... The war had reached a stage where neither side would tolerate the continued existence of the other, and the allies of the loser could not expect much in the way of gentle treatment from the victor. We had to pick a winner. Humanity needed answers, and fast".
Advertisement:

relates the adventures of Ensign Second Class Alexander Jardin, sole survivor of ECS-154 Bellarmine, and his interactions with his rescuers as the titular Fish out of Water. Discovering that humanity is uncomfortably close to a genocidal war between the Loroi and Umiak races, the Terran Colonial Authority dispatches a scouting mission to gather better information about both sides. When Bellarmine is destroyed by an unknown vessel in a contested system, Jardin is rescued by a Loroi warship... and promptly finds himself thrown in at the deep end of interstellar diplomacy.

While Outsider has suffered some Schedule Slip since its creation, the art is well-realized and Francis has put an admirable amount of forethought into crafting his universe and its internal logic.