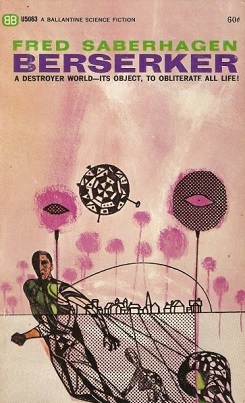 They're coming.
To us, the Carmpan watchers, the withdrawn seers and touchers of minds, it appeared that you had carried the crushing weight of war through all your history knowing that it would at last be needed, that this hour would strike when nothing less awful would serve.
When the hour struck and our enemy came without warning, you were ready with swarming battle-fleets. You were dispersed and dug in on scores of planets, and heavily armed. Because you were, some of you and some of us are now alive.
Advertisement:

Not to be confused with crazy bloodthirsty norsemen or Warriors of Khorne, or the wrestler the Berzerker, Fred Saberhagen's Berserker series is a collection of short stories, novels, and collaborations with other writers dealing with city-sized, spacefaring robots intent on destroying all life in the galaxy. The Berserkers themselves are relics of an ancient war between two now-extinct alien species.