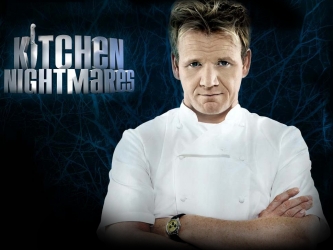 He's going to help, whether you like it or not.
"I'm forty years of age, and I've gone to a lot of restaurants, but I've never, ever, ever, ever met someone I believe in as little as you."
Advertisement:

A cooking-themed Reality Show in which chef Gordon Ramsay visits struggling restaurants and attempts to turn them around. Began as Ramsay's Kitchen Nightmares on Channel 4 before FOX adapted the series for American audiences.

The show shot up to near-viral levels of popularity after it featured Amy's Baking Company. Tropes specific to that episode should go here.

At the end of the 2013-2014 television season, Gordon Ramsay announced that he decided to end the show so that he could focus on other projects, although he has not ruled out the possibility of returning to it at some point in the future. Since then he has filmed one new season for the UK version of the show, and a sequel called Hotel Hell, focusing on hotels instead of restaurants.

The show's official YouTube channel posts various clips and some full episodes from the US and UK versions in their uncensored glory, which you may find here.

In 2018, Ramsay launched a new show, 24 Hours To Hell and Back. The format is basically the same idea in Kitchen Nightmares, but with Ramsay first eating at the restaurant in disguise and with a countdown clock of just 24 hours to renovate the restaurant, as well as a few other new touches added in to try to distinguish the show from Kitchen Nightmares.

Tropes pertaining to the show in general:

Finally realizing that Amy and Samey were too far gone from any help and too stubborn to listen to his advice, Ramsay gives a calm but accurate summation of the problems they have before leaving.

Finally realizing that Amy and Samey were too far gone from any help and too stubborn to listen to his advice, Ramsay gives a calm but accurate summation of the problems they have before leaving.