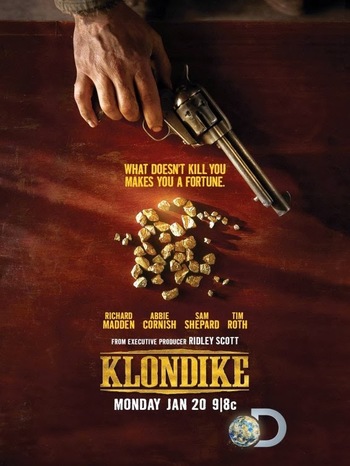 This place kills.
Jack: The Yukon is the only place in the world where a dumb shit can be a king and a king can be a dumb shit.
Advertisement:

Klondike is a 2014 miniseries about the Klondike Gold Rush of the late 1890s. It is the first scripted series to be broadcast by the Discovery Channel.

The miniseries revolves around Bill Haskell (Richard Madden), a real-life adventurer who took part in the gold rush. Together with his friend Byron Epstein (Augustus Prew), he travels to Yukon, Canada, for the opportunity of quickly amassing a fortune. As they make their way to Dawson City to establish a mining claim, Bill encounters the following individuals:

Harsh conditions and unpredictable weather threaten the two friends, but they soon find out that the real danger comes from those who share their pursuit of riches.

What you want to be is the trailblazer.