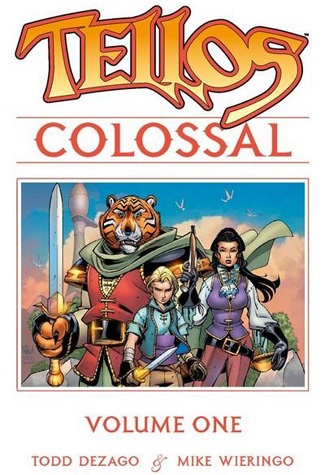 Wantednote Pictured from left to right: Koj, Jarek, and Serra.
Tellos is a magical patchwork world made up of a myriad different realms, populated by creatures of myth and legend. A fantastic land filled with adventure around every corner and danger at every turn! Journey to a world more wondrous than any you have ever imagined!
Advertisement:

Tellos is an Adventure/Fantasy graphic novel written by Todd Dezago with art by the late Mike Wieringo. It is set in a fairytale land of flying cities, dragons, magic, reptilian mooks, sword fights, and airboats. We follow Jarek, a young boy; Koj, his Man-Tiger companion; and Serra, a swashbuckling Pirate Captain as they get in trouble, meet new people and fend off all sorts of dreadful threats.

The original series debuted in 1999. Volume one, published by Image Comics in 2008, collects the ten issues comprising the original run, plus an afterword by Dezago, a bunch of other stories (namely: Tellos: The Scatterjack Story, Tellos: Prologue and Tellos: Prelude) and a thirteen page sketchbook. Here's a list of the One Shots that followed: