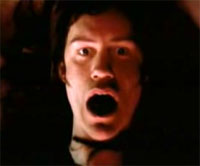 Jaaaaaaaam. JAAAAAAM. JAAAAAAAAM. JAÅÅÅÅÅÅÅÅM. JÅaAaååAaAaAM.
"When dancing, lost in techno trance, arms flailing, gawky Bez, then find you snagged on frowns, and slowly dawns, you're jazzing to the beep tone of a life support machine, that marks the steady fading, of your day old baby daughter. And when midnight sirens, lead to blue flash road smash, stretchers covered heads, and slippy red macadam, and find you creeping 'neath the blankets, to snuggle close a mangled bird, hoping soon you too will be freezer drawered... Then welcome, ooh chemotherapy wig, welcome in Jaaaaaaaam."
Advertisement:

From Chris Morris, the creator of Brass Eye and The Day Today came Jam, a Sketch Comedy show with a difference. The show was a televised adaptation of the late-night Radio 1 series Blue Jam (also by Morris), and employed a unique combination of filming techniques and ambient music to create the sensation of the viewer being on drugs. Usually very, very bad drugs. At least one memorable piece per episode was 'filmed' via security cameras and a double to blur the line between 'reality' and 'sketch' even further. There were no ad breaks, no canned laughter and no closing credits, all of which, it was felt, would ruin the mood of the show. It just faded in www.jamcredits.com for a few seconds.

Notable for its heavy use of Black Comedy; we're talking seriously deranged stuff here. Nothing was taboo, not even the literal dead baby.

If you were looking for the post-apocalyptic novel of the same name by Ben "Yahtzee" Croshaw, then you can find it here.

Jam provides examples of the following. Help yourself to a shoe wire if you'd like, sir: