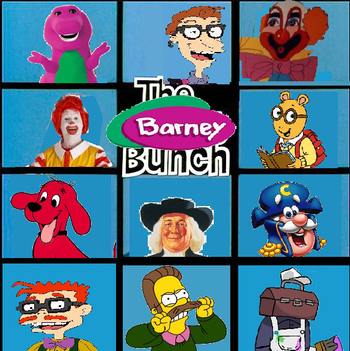 The Barney Bunch as a community are a sometimes-loosely-sometimes-closely affiliated group of people on YouTube and other sites who make Speakonia-narrated videos about the exploits of Drew Pickles, Barney, The Wiggles, Ronald McDonald (better known as the Penis Clown), and other fictional characters, food mascots, and even celebrities, completely changed into extremely promiscuous homosexual men who regularly do unspeakable things. Originally having started out as a trolling group on Newgrounds in 2005, by the time it migrated to YouTube in 2006, it evolved into an ever changing community of users, with several 'wars' within the community throughout the late 2000s to mid-2010s.

The basis is to get a childhood cartoon character, food mascot, or celebrity (for example: Snagglepuss, Lucky the Leprechaun, or The Jonas Brothers) and make them talk about their extreme homosexuality. No information whatsoever is needed on the character, and not even Pablo Sanchez is immune. As a result, Hilarity Ensues. No matter what your opinion is on the Bunch, whether you think they're a good Stealth Parody of exploitation of common gay stereotypes or just tasteless, you've seen at least one of their videos in your lifetime.

A few years back, some members of the community also trolled FanFiction.Net with fanfics

that were done in the same way

. They disappeared after a few months, though some higher

have been written in the years since.

In its later years, the Barney Bunch community was split between VidLii, a website designed to mimic the late 2000s YouTube layout, and YouTube. The Barney Bunch in the mid-late 2010s is noticeably different than the Barney Bunch of years past, as users such as Blood, Skewt, and Life Or Death spearheaded an eschewal of the classic BB video styles (such as the "Drew Pickles Goes To" videos) in favor of more outrageous, raw, spammy videos, but by the 2020s the old style has been returning, and new, story-driven videos have surfaced as well.

See also Secret Missing Episodes, a spiritual Spin-Off series of videos made by the bunch.

"Bag, that was swell."
Feedback

Since Pizza Hut refused to make his super swell pizza, Drew Pickles goes there himself and makes it by himself, starting by getting the... "pepperoni"

Since Pizza Hut refused to make his super swell pizza, Drew Pickles goes there himself and makes it by himself, starting by getting the... "pepperoni"