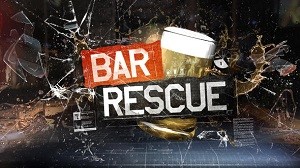 "I don't embrace excuses. I embrace solutions."
—Jon Taffer, during the opening narration of every episode.
Advertisement:

"Running a bar is not just a business. It's a science."

Bar Rescue is a reality show that first aired on Spikenote which would later be known as the Paramount Network on July 17, 2011.

The show revolves around Jon Taffer, an expert hospitality industry consultant and one of six members of the Nightclub Hall of Fame, going around to failing bars the country over, figuring out what is wrong with them and how to fix them. The show quickly became one of Spike's flagship shows, due in no small part to the "bar science" used through Taffer's planning.

A spin-off series (Bar Rescue: The Dirty Truth) premiered on September 20, 2020, featuring additional "truth bomb" captioning not unlike what would appear on Pop Up Video.

"Pull back the doors, bust open the tropes, and make a call for help to 'Bar Rescue'":

Dirty Red: All you peeping toms, I'm sure y'all had fun.

Taffer walks out for the first time ever.

Taffer walks out for the first time ever.