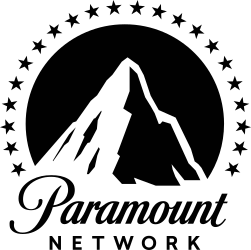 Paramount Network is a ViacomCBS-owned general entertainment network named after the Paramount film studio. The network is meant to be an analog to AMC and FX, in that it's known for prestige television on par with premium pay TV networks, such as ViacomCBS's own Showtime.

The network is a relaunch of what was formally known as Spike, aka the "First Network for Men" (at least until Network Decay settled in), which itself was a relaunch of the country music network TNN, before it became a general entertainment network to avoid redundancy with CMT. Spike would revert to the latter format in 2015, in-part due to the channel gaining just as much viewership from women as it did from men.

In 2017, after also suffering from sagging box office returns and an initial failed attempt to re-merge with CBS Corporation, Viacom unveiled a five-point turnaround plan where the company would put all its resources behind six "flagship brands". In addition to Paramount, these were Nickelodeon, Nick Jr., MTV, Comedy Central, and BET.

Spike, which was already going through the aforementioned decay and Audience Shift, relaunched as Paramount Network on January 18, 2018, in order to strengthen the connection between the television side and the film studio. Under Viacom's strategy, the network had already picked up several shows that were originally meant for sibling networks, such as the TV Land comedy Nobodies. The network would also continue to add more syndicated sitcoms to its programming mix, a practice that began during Spike's final months.

Paramount Network's first year would draw mixed results, with Spike's holdover programming remaining intact and the second season renewal of Yellowstone being the only positive takeaways. Nobodies would move back to TV Land after only two episodes and be canceled shortly afterwards. Heathers suffered from negative reviews, was pushed back due to a school shooting, and nearly dropped altogether due to another school shooting. The rest of Paramount Network's new scripted programming would be canceled after a season each. As if to twist the knife further, the Spike brand later made a comeback in 2019 via Viacom's newly-acquired streaming service, Pluto TV, which added two Spike-branded networks showing older Spike originals.

Viacom and CBS eventually remerged into ViacomCBS at the turn of the 2010s, bringing Paramount Network and Showtime back under the same corporate umbrella. In fall 2020, Bellator MMA telecasts were moved over to CBS Sports Network, ending the network's sports programming history dating back to its time as TNN (they later found a permanent home at Showtime not long after). Shortly after, ViacomCBS announced that it would cut scripted programming on Paramount Network, moving upcoming ones to other services (e.g., Emily in Paris, which went to Netflix), and cancel all unscripted programmingnote Only Bar Rescue, Lip Sync Battle and, later, Ink Master, three of the network's highest-rated programs (and holdovers from Spike), escaped that fate by way of Channel Hop. Scripted programming would continue but at a slower pace, with only one per quarter. This was a cost-cutting move, since there was no reason to keep an additional "prestige television" network with Showtime and now Paramount+ around. Paramount Network was set to relaunch yet again, with a focus on original television films and limited series produced by the Paramount Studio. However, these plans were nixed by January 2022, thanks to the combination of COVID-19 Pandemic difficulties and the smashing success of Yellowstone, with ViacomCBS electing to leave the network as it is.

Internationally, Paramount Network was first rolled out to Spain in June 2018, replacing the original Paramount Channel; an otherwise unrelated, international brand that primarily deals in movies from the Paramount film library. The network launched next on July 4, 2018 in the United Kingdom where, coincidentally, Viacom also operated a British version of Spike—a Channel 5 sibling that was later renamed to 5Spike— making it a sibling to the very same brand it replaced in the U.S. The two networks merged in 2020.

Not to be confused with the short-lived Paramount Television Network, the United Paramount Network, Paramount+ (the re-brand of streaming platform CBS All Access) or the aforementioned Paramount Channel.

Original Programming on Paramount Network with their own pages include