"...Oh give me that pleasure! But﻿ not just any pleasure...pleasure that is the direct or indirect result of specifically homosexual erotica!"
—Pube Muppet goes to Office Depot 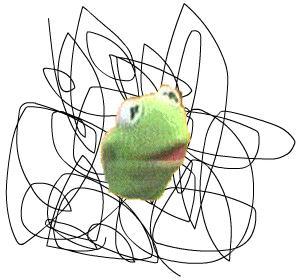 Picture this: you're DrunkMagikoopa. You're respected by everyone on Newgrounds. Your Animutation are the stuff of legend. Where do you go from here? Troll your fanbase of course!

, starring a disembodied, homosexual, promiscuous Kermit the Frog head with pubes, and followed it up with pube mupit gets license!1

. They were designed to piss people off, and judging by their reviews, they succeeded. Then something unexpected happened... people liked them, and started creating their own, starting with Pube Muppet Buys Dinner

Eventually, Pubey migrated to YTMND and YouTube. He's mostly died out on Newgrounds and YTMND (although what hasn't died out on YTMND?), but there are still quite a few Pube Muppet video makers on YouTube, where he would be adopted by members of the Barney Bunch community.

The Clock Crew makes (or made) a lot of Pube Muppet videos.

I would like some tropes, but not just any tropes...: