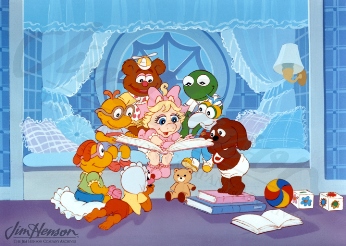 Clockwise from top left: Fozzie Bear, Kermit, Gonzo, Rowlf, Animal, Skeeter, Scooter. In the center (with the book): Miss Piggy.
Muppet Babies (1984-1991) was one of the few well-received Spinoff Babies conversions, partially because it was one of the first. Spinning off from The Muppet Show, the show's premise was a takeoff from a sequence in The Muppets Take Manhattan involving baby-versions of the characters, itself later referred to in an amusing callback. It also naturally spawned a side franchise of children's books.

Aside from the original Nanny character, whose face was never seen, it featured most of the big Muppet celebrities (Scooter's hitherto unknown sister Skeeter notwithstanding) discovering quite mundane things and approaching them in a precocious, childlike way — before completely blowing them out of proportion with their overactive imaginations. The Once an Episode random song and trademark gimmick of spliced Live Action Stock Footage (one of the main factors that has prevented it from getting an official DVD release) gave it a rather surreal quality, too. And despite being a Saturday morning spinoff, it managed to contain all the wit and intelligence of its predecessor. Some fans even prefer it to the original Muppet Show. It briefly gained a companion show in Little Muppet Monsters (running in an hour-long block as Muppets, Babies and Monsters), but that show was quickly cancelled for various reasons.

Later seasons would feature guest appearances from other Muppet characters, including fan favorites Statler and Waldorf. The Babies also had a memorable appearance in Cartoon All-Stars to the Rescue. For the 2018 CGI reboot from Disney Junior, see Muppet Babies (2018).