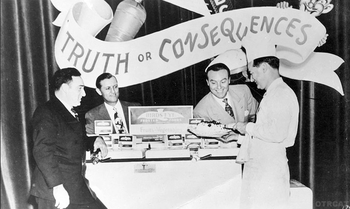 Contestants on the show were asked silly trick questions which they almost invariably failed to answer correctly. If they answered incorrectly, or failed to come up with any answer in a short time, Beulah the Buzzer went off. The host then told them that since they had failed to tell the truth, they would have to pay the consequences. Consequences consisted of elaborate stunts, some done in the studio and others done outside, some completed on that week's episode and others taking a week or more and requiring the contestant to return when the stunt was completed. Some of the stunts were funny, but more often they were also embarrassing, and occasionally they were sentimental (as when long-separated relatives were reunited within the context of the stunt).

The show was popular enough that the town of Hot Springs, New Mexico renamed itself

after the show in 1950 as part of a publicity stunt.

Truth or Consequences was one the first game shows to be broadcast on television, with an experimental broadcast on WNBT's first day on July 1, 1941. The show returned to the small screen as a prime-time series in 1950 with Edwards as host before being replaced by Jack Bailey in 1954 upon return to NBC. The prime-time series ended in September 1956, then was relaunched as a daytime series in December with Bob Barker as host. Another prime-time version aired simultaneously with the daytime version on NBC from December 1957 to June 1958 with Steve Dunne as host.

Barker stayed on for the rest of the NBC run and for the entire 1966-75 syndicated run. The first syndicated run ended in 1975 because they had taped enough episodes to last for another two years; by the time production started back up in 1977, Barker was unavailable as he was busy hosting both the CBS daytime and syndicated nighttime versions of The Price Is Right (having replaced Dennis James on the latter that year). Bob Hilton replaced Barker for the 1977-78 run and comic Larry Anderson hosted the 1987 run.

The 1950 Looney Tunes short The Ducksters parodies this show (as "Truth or AAAAAAAAAHHH!!!"), with Daffy Duck and Porky Pig as the sadistic host and hapless contestant respectively.