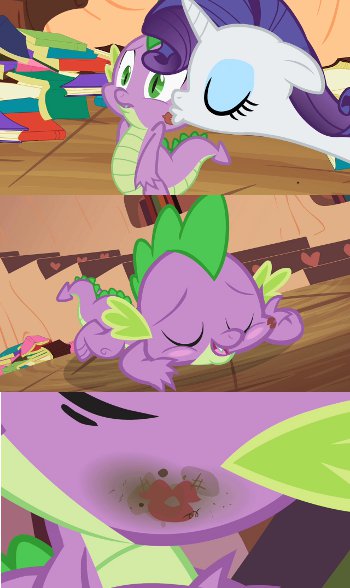 A kiss from the one you love is a treasure to be cherished. Now, if only we could do something about the rest of his cheek.
"I'm gonna continue never washing this cheek again."
— Fry, after being given a Smooch of Victory by Leela, Futurama, "Insane in the Mainframe"

Bob may have a Precocious Crush on older Alice. Or Alice may have a Celeb Crush on the famous Trope Troperson.

Either way, if the object of desire is particularly pleased, affectionate, or otherwise inclined, sometimes they'll give their admirer a kiss — or simply touch them. And the admirer will so treasure the moment and the memory that they want to keep the spot of the contact as it was at the moment forever — and that includes never washing it so as to avoid washing away the kiss (lipstick, etc). The Stock Phrase appears frequently enough to actually be its own trope. And when the "never washing it" declaration is taken to extremes, it almost always results in a Gross-Up Close-Up.

Sometimes the person is just saying it in dreamy-eyed appreciation. In other cases, they mean it literally, and will be seen days later, squeaky clean except for the kissed spot. Sometimes some wiseass will remind them that they seldom wash that part of their body anyhow, so it won't make much difference.

Of course, this trope is not strictly limited to a spot where someone has been kissed. It can be a touch, or a handshake, or just a spot where the person stood. The kiss is just the most well-known iteration.

It's also important to note that the recipient of the kiss usually thinks of the one kissing them as being a little out of their league, or else they hold them in such high esteem that a kiss is more like a divine bestowal than an actual kiss between people on the same romantic level.