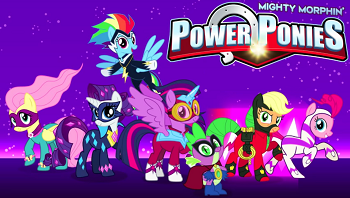 In a World… much like our own yet so different... technology has marched on and cities has sprawled up, one of the most famous being Maretropolis, a shining beautiful city... but wait, what's this? A mad mare with a mangy monsterous mane attacking the fair city? Who will save the city?!

None other than the Power Ponies!

A group of six powerful mares along with their well-meaning sidekick who dedicate their lives into protecting the lives of the fair city as well as being involved with the affairs of the international kind. Or at least, in their world of comic books.

The Power Ponies were developed by the team of Stan Leap and Jack Derby. Published by Marevel Comics, the concept was taking various comic book characters, most having faded into obscurity, and combining them to form a team. Despite the gamble, it succeeded beyond the wildest dreams and has become one of the most popular comicbook series. While Stan Leap and Jack Derby helped make the various characters, it was believed most of the ideas came from a third party, but neither creator has acknowledged this. Because of the overwhelming popularity, several incarnations of the team from different line-ups have been seen.

—The Power Ponies: The original universe that started it all, this is the longest and is Marevel's official canon stance on the whole series. Filled with ups and downs, it's still beloved. Rumors talk about a potential reboot, something that the company has never done with any of its series.

—The Ultimares: The most famous offshoot and considered second to the original, The Ultimares were a modernized take on the Power Ponies. Part of the Ultimate Marevel line up, it's a reimagining of the team as a government-sanctioned taskforce against supernatural threats across the globe. Known for its Darker and Edgier content, it served as the main inspirations to Hoss Wheatgrain's Power Ponies movie.

—The Power Zomponies: The Power Ponies as they fight off the zombie virus from the Marevel Zombie line-up. Currently planning its finale.

In addition, there have been several limited or otherwise indirect stories or continuities of the Power Ponies. Usually done for independent contracting writers, they are still published under the Marevel name, but not directly under their control and may or may not be part of a different continuity all together.

—Power Pony POV: Created by the group of writers and artists known as Reharmonized, it serves as a deconstruction and reconstruction of the franchise starting off by showing the true consequences during the infamous D-Day arc. It has since developed into one of the most well-respected and brilliant series and considered a cult classic. Said to be on the home stretch.

—Power Ponies Anew (working title): A reimagining of the Power Ponies' beginning, it serves as a reinterpretation of the entirety of the series. While in its infancy, interviews and sneak peaks have shown to be promising.

There was also a limited series of manga adaptation of the Power Ponies, taking many of the classic elements from Neighponese manga an applying them here, including fanservice, longer story arcs, younger heroes and overall having that manga feel.

Furthermore, Marevel's film franchise under the control of Whinny has ended up producing a powerful film franchise culminating in several complex arcs with its main head runner, Hoss Wheatgrain.