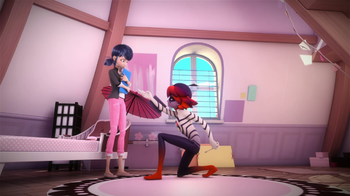 I just want Marinette to love me.

Nathaniel, one of Marinette's classmates, is caught drawing in physics, gets his crush on Marinette revealed in front of class, mocked by Chloé, and sent to the principal's office, and all that on his birthday! Afterwards, an evil Akuma possesses his pencil and turns him into Evillustrator. Meanwhile, Marinette tries to convince Sabrina to stand up to Chloé.