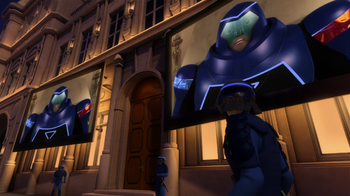 Ladybug and Cat Noir are now outlaws. They must be hunted down and taken into custody immediately.

Parent's Career Day at Marinette's school gets interrupted after Plagg accidentally steals Chloe's new bracelet, and everyone is a suspect. After Officer Roger refuses to arrest Marinette without proof, Chloe's father fires him. Roger soon seeks revenge as akumatized Rogercop.