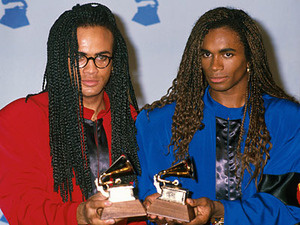 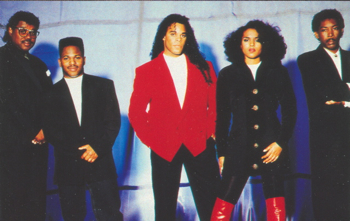 "The one thing I've learned; a lot of things are very controlled. When it comes to answering questions, and because I went through what I went through, being open is the best way because in the end, what is always comes out. What isn't always comes out. If you're not what you are, it will always come out and I learned my lesson the hard way."
— Fabrice Morvan
Advertisement:

There have been many scandals in the pop music world, but none quite like Milli Vanilli. They were, in their most famous incarnation, a duo made up of Fabrice "Fab" Morvan and Rob Pilatus (listed in the liner notes of their hit record Girl You Know It's True as "Rob & Fab, The Brothers of Soul"). Milli Vanilli were one of the most promising young pop acts of their time, and released the singles "Girl You Know It's True", "Baby Don't Forget My Number" and "Blame It on the Rain", to major success. However, their tenure on the charts ended abruptly when it was discovered that Rob & Fab were not only lip-synching their songs, but never actually sung the tracks on record, turning them into one of pop music's biggest punchlines overnight.

Producer Frank Farian, formerly the songwriter behind Boney M, had been a producer for some time after, and sought to create a group that combined pop music with hip hop. The studio musicians he assembled were musically up to par, but the vocalists — Charles Shaw, John Davis, Brad Howell, and twin sisters Jodie and Linda Rocco — didn't seem to fit any sort of marketable image. In what was a common practice in Farian's time — Boney M was fronted by Bobby Farrell but the vocals were usually sung by Farian, Marcia Barrett and Liz Mitchell — Farian hired Fabrice "Fab" Morvan and Rob Pilatus, two models and aspiring singers he found in a Munich dance club to serve as the frontmen for the band, tempting them with a large advance, and then informing them that they were going to lip-sync all the music in public. The pair, already signed and having no way to pay back the advance, reluctantly agreed.

The debut, All or Nothing (1988) set the tone for their output, with Europop music informed by Hip-Hop and Funk. Arista Records, liking what they heard, snapped them up for a North American release. Leaving some songs behind, some new songs were added and the track list was shuffled into a new album, titled Girl You Know It's True. This album went six times platinum, and the title track became their Signature Song.

Charles Shaw, one of the real vocalists in the actual Milli Vanilli band, actually spoke out at one point that he had sung on the album and that Rob & Fab were frauds, but Frank Farian paid him $150,000 to retract the statements and keep quiet. Rob Pilatus by this time was making cocky statements to magazines such as "I'm the new Elvis" and the two were increasingly pressuring Farian to let them record actual vocals on the next Milli Vanilli album. Having had enough of all the pressures, Farian finally confessed on November 14, 1990, that the duo did not, in fact, sing any of the Milli Vanilli material. Confronted by the media, the group copped to the deception. To say that there was a backlash would be, uh... putting it pretty mildly.

A week later, the National Academy of Recording Arts and Sciences revoked their Best New Artist Grammy, and Rob & Fab announced they were handing back the statuettes at a press conference

. A class-action lawsuit was filed, and Arista Records responded to the media backlash by dropping Milli Vanilli from their roster and deleting their music from their archives, effectively putting their music out of print. Refunds were even issued to concertgoers and record buyers.

The group's second album was eventually released in Europe and Asia under the title The Moment of Truth, credited to "The Real Milli Vanilli". It had been edited from its original intended form to incorporate Ray Horton and Gina Mohammed, two younger, more "marketable" singers who simply re-recorded material already completed by the actual original band members or did backup vocals on finished tracks. They were incorrectly credited at many points on the album, but they did at least sing. Mohammed was falsely and retroactively given credit for the Rocco twins' vocals on the first album in order to further "legitimize" the new group. While the first single from the album was a hit in some countries, the group failed to maintain the success of its Rob & Fab-fronted incarnation.note They also released the album again under the band name "Try n B", gaining a little success without the name association, but nothing to write home about

After three years of vocal lessons, Rob & Fab, under that name, released a self-titled album and even appeared on The Arsenio Hall Show to perform their lead single, "We Can Get It On,"

ACTUALLY live. The public, however, was done with them, and the album, which had distribution problems as it was, only sold somewhere between 1,000 and 3,000 copies, going almost immediately out of print. In the late '90s, Rob, Farian and the original band reconciled in order to put out a comeback album in 1998, minus Fab, who wanted nothing more to do with Farian. The album was never released, for tragic reasons - Rob Pilatus, after having fallen on hard times, abusing drugs and even committing robberies, was found dead of an alcohol and prescription pill overdose on April 2, 1998. He was 32 years old.

Fabrice Morvan has since gone solo and continues to perform to this day. A biopic about Milli Vanilli is in the works courtesy of Universal Pictures.

The disastrous concert that led to Milli Vanilli's exposure as a fraud.

The disastrous concert that led to Milli Vanilli's exposure as a fraud.