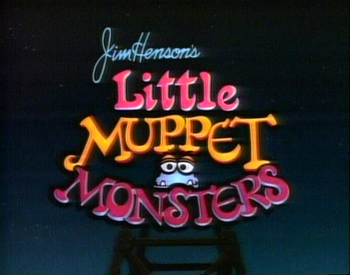 The forgotten sibling to Muppet Babies.

After the success of Muppet Babies (1984), CBS wanted another show to cash in. Thus, Jim Henson and DePatie-Freleng Enterprises created a mixed live action and animated series for CBS, Little Muppet Monsters (which ran in an hour-long format with Muppet Babies, billed as Muppets, Babies and Monsters). The concept was three live action Muppet monsters: Tug (Richard Hunt), Molly (Camille Bonora), and Boo (David Rudman), ran their own TV station from the basement of the Muppets' apartment building. The show mixed live-action Muppet segments with animated bits, including Pigs In Space, Kermit and Fozzie: Private Eye, 'Muppet Sport Shorts with Animal, and other supporting segments.

However, due to various issues (see the Trivia page), the show was pulled after three episodes and was swiftly cancelled, though the theme song remained in the closing credits to Muppet Babies until that show ended its' run in 1991. Some of the animated footage was also reused in Muppet Babies.

The show provides the example of: