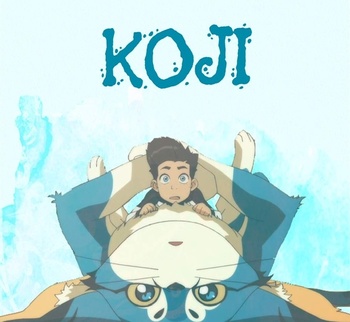 Koji is an animated short created and directed by Alexander Snow, and animated by Studio Mir in collaboration with Wolfbat Studios.

As an infant, Koji (Martha Marion) was aboard a small ship that crashed on a vibrant earth-like world, inhabited by amazing alien creatures and hybrid Earth animals. He was discovered by Tako (Robbie Daymond), a giant blue feline creature with the power of water and ice, who adopted him, creating an inseparable bond of brothers. As Koji grows older, he gains the power of lightning, in both power and speed.

Years later, an evil known as the Robot King and his mechanical army wish to take over the land, and Koji and Tako must go on a journey to stop him. Along the way, they make allies and discover more about themselves than they knew.

The short was first released on November 5th, 2018.