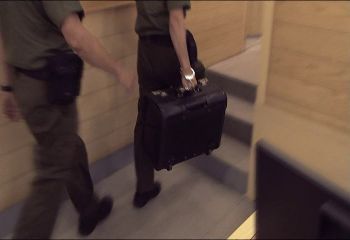 Your important stuff is safe in that briefcase.note Unless the bad guy(s) resort to drastic measures.
Max: Oh, miss, I seem to have lost something.
Stewardess: Well, if you describe it to me, maybe I can find it.
Max: Yes, well, it was a black attaché case, about, oh... [gestures with hands] so big. Morocco leather. Beautiful case. And let's see... Oh, yes! There was a man attached to it.
— Get Smart, "Closely Watched Planes"
Advertisement:

When whatever is in the briefcase is too important to lose, the briefcase will often be handcuffed to the courier. Whether it's a Briefcase Full of Money, jewels, or most often top secret documents, it adds a level of security to the package. However, there are ways around this.

Even if we don't ever see what exactly is in the briefcase, seeing it handcuffed to the courier immediately communicates that it is something of great value or something requiring great security.