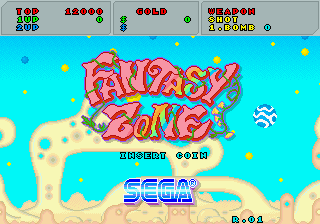 Long ago, far away in space, there existed a "Fantasy Zone" where a courageous hero called Opa-Opa (the Player) fought in a valiant cause to rescue the "Fantasy Zone" from its enemies.
—The opening sentence at the beginning of the game.
Advertisement:

Fantasy Zone is a horizontally-scrolling Shoot 'em Up made by Sega. You control a ship called Opa-Opa, and have to bomb a set number of targets in each stage. Once these are destroyed, a boss will appear, which will have to be defeated to move on to the next stage.

The screen scrolls automatically whenever Opa-Opa moves to the left or right (except during boss battles). Defeated enemies leave behind coins, which can be used to purchase weapon, missile and speed upgrades from the shop, which appears once per level.

Fantasy Zone was originally released in arcades and the Master System (both versions were developed simultaneously), but later saw ports appearing on the MSX, Family Computer, Nintendo Entertainment System (a different port from the Famicom release), X68000 and the TurboGrafx-16.

A newly-made Sega Genesis port of Fantasy Zone, again developed by M2, is set to be included on the Mega Drive Mini 2, releasing in October 2022.

Opa-Opa also showed up as a minor frequent character in Red Photon Zillion, a Sci-Fi Anime that Sega co-produced and made games based on. He's also a playable character in Sonic and Sega All-Stars Racing.

Tropes used in the series: