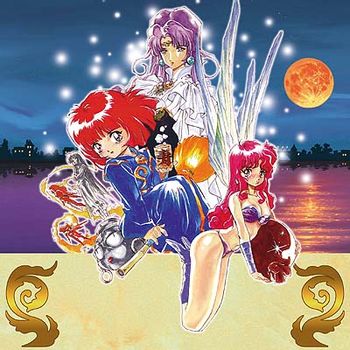 A series of side-scrolling shooters made by Success, Cotton was one of the earliest Cute Em Ups involving Cute Witches and Beam Spam to pre-date Touhou Project. Known mostly to hardcore gamers, the games involved the titular Natta de Cotton searching for candies called Willows (not to be confused with the film Willow), and her fairy side-kick Silk who, when not trying to look for help to save some kingdom, encourages Cotton to help her anyway with the promise of said sweets.

To Cotton, Willows are Serious Business, and she will absolutely do ANYTHING in her power to get hold of (and consume) one of these, such as blasting everything in her way, apparently...

In 2021, to celebrate the series' 30th anniversary, a series of ports of most games in the series was released for Nintendo Switch and PlayStation 4, along with a remake of the first game and a brand new game.

In addition to her own series, Cotton has made various Crossover appearances in other video games, such as Rondo of Swords for the Nintendo DS, Studio SeistA's Trouble Witches Origin (as DLC alongside Silk) and Success' sweets-themed puzzle game KASIORI (again, alongside Silk). Cotton is also a playable character in Umihara Kawase Fresh!, as well as Umihara Kawase BaZooKa!!note in both her normal outfit and her appearance from Fresh! alongside Appli.