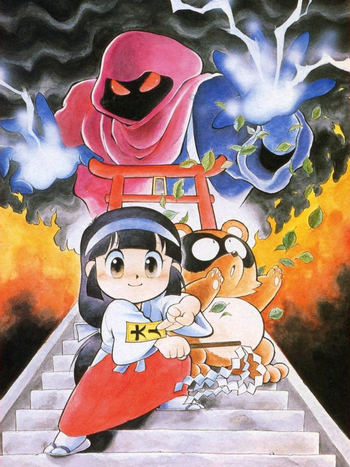 Kiki Kai Kai (奇々怪界) is a relatively obscure arcade game made by Taito in 1986 in Japan. It features a young Miko named Sayo who has to save the Seven Lucky Gods

and the boat they were in from various odd creatures out to kill you with Rapid-fire Ofuda and a Gohei. It was re-released in Taito Legends 2 (all versions).
Advertisement:

Come 1993, a SNES game featuring little Sayo-chan and Manuke, a leaf-throwing Tanuki is released in the west as Pocky & Rocky.

The whole series has 6 games in total:

The series also have a Spiritual Successor with Heavenly Guardian, which is the result of the developers losing the license after Taito was bought out by Square Enix.

If "奇々怪界" is put into Google Translate, it translates to "bizarre mysterious world"... we'll let you decide what to make of it.