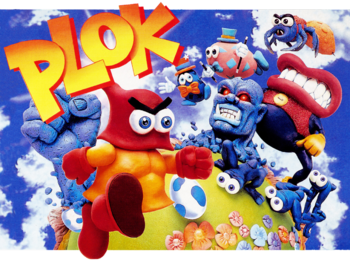 "Plok is an irresistible, irrepressible, unstoppable, highly improbable and downright dangerous bundle of pure energy.
Plok does not like fleas.
Plok has the amazing ability to fire all his body parts at will.
Plok can really throw a punch.
[...]
Plok is the King of the beautiful island called Akrillic, part of the archipelago Poly-Esta."
— Instruction manual
Advertisement:

Sorry. The above editor lost his hands halfway through typing. Don't worry, they came back.

Plok is a Super Nintendo Entertainment System game developed by Software Creations in 1993. It's a platformer starring Plok, an animated pile of clothes, who wakes up one day to find out that the flag on his house (a family heirloom) has been stolen. After retrieving it from nearby Cotton Island, he returns to his island of Akrillic and finds out that it's been taken over by fleas! He travels through his colorful, surreal island, vanquishing fleas along the way and eventually entering the Flea Pit to battle the Flea Queen.

Plok's special power lies in how he can launch any of his limbs at will to damage enemies. Once the damage has been done, they return to Plok until he decides to attack again. Another integral use of this ability is using it to solve puzzles that involve having to "sacrifice" one of Plok's limbs to activate switches. Once a limb hits a switch, it is placed on a hanger that may be right next to the switch or several screens away. If he loses all his limbs, he becomes a defenseless bouncing ball-thing. With an amulet found halfway through the game, he can collect shells and use their power to transform into a buzzsaw when he jumps.

The game's most notable feature is its prog-rock-inspired soundtrack, which was composed by Tim Follin and pushed the SNES to its limits.

Unfortunately, Plok was released right when colorful platformers were facing a massive backlash, and it quickly fell into obscurity.

. Some very cool pictures and insights on the game are over here

on the website of John and Ste Pickford, the creators of the game. In August 2013, almost exactly twenty years after the game was first released, the Pickfords started work on a weekly comic called "Plok The Exploding Man", the first page of which can be found right here

There have been two attempts at fan sequels: a higher-res 2D game developed from 2006-2009, and a 3D game started in 2012, which even got as far as a playable alpha demo, but was quietly abandoned several years later.

A digital re-release of the game looks unlikely, as the Pickford Bros. are unsure who currently owns the rights, but they have dropped occasional hints over the years of possibly making a sequel. (Most people who've looked into it believe that the rights have reverted back to the Pickford Bros.) However, Plok himself did show up in another game — as a miniboss in the Atari Lynx game Zaku

The Plok The Exploding Man comic contains examples of: