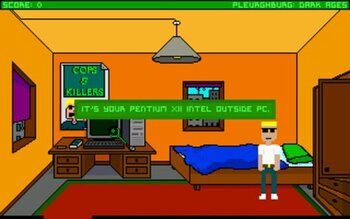 Pleurghburg: Dark Ages is a freeware Adventure Game released by Gaspop Software. It can be downloaded from here

A semi-sequel to the company's earlier non-Adventure game Cops & Killers, the player controls police detective Jake McUrk in the now relatively crime-free city of Pleurghburg. While investigating screams coming from the old morgue he discovers a series of grisly murders perpetrated by a group of robed men. The game plays out over four days as Jake tries to discover the secret behind the robed men before Pleurghburg becomes a crime-ridden hellhole again.