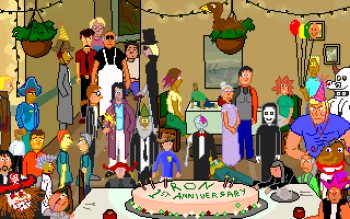 is a long-running series of computer games (most of them adventure games made in Adventure Game Studio) created by many authors and set in a Shared Universe. The setting for the games is a fictional town of Reality-on-the-Norm (or simply "Reality" for short), hardly an ordinary town, inhabited by a multitude of peculiar individuals.
Advertisement:

The project was started by Yahtzee (yes, that Yahtzee), with a 2001 game Lunchtime of the Damned, which involves a teenage sorcerer Davy Jones trying to stop a rampaging zombie he accidentally created. Since then, loads more of games have been made (there are about 80 of them as of late 2009).

Other notable indie-delevopers who has contributed to the project are Dave Gilbert and Francisco Gonzalez.