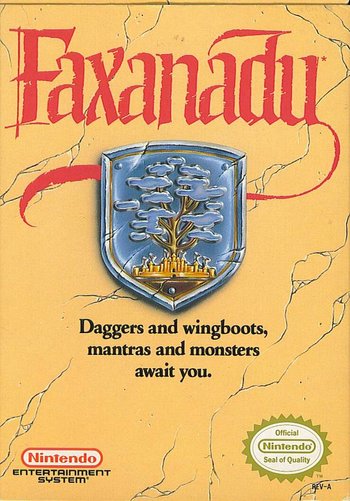 "Unlock doors of legend on your journey through Faxanadu."
— Back of the box
Advertisement:

Faxanadu is a 1987 Side View Action-Adventure Role-Playing Game for the NES. It is considered a side story for the Dragon Slayer series of videogames and is actually a port/spinoff of the PC88 game Dragon Slayer II: Xanadu (Faxanadu being a portmanteau name of Famicom Xanadu).

The game features the adventure of a nameless elf who returns to his home town of Eolis to find it depopulated and overrun by monsters. After a visit to the local church and the King, the hero is tasked by the King to infiltrate the "World Tree" and awaken three springs of pure water. Afterwards, The Hero is sent to the higher branches of the World Tree to locate and defeat the Evil One, the hideous monster responsible for the invasion of the towns.

The hero can equip different types of items: Weapons, armor, shield, and miscellaneous that can be used directly in the overworld map. He can learn magic as well, and use different spells with different attributes and effects to attack enemies.

Was featured in a couple episodes of Captain N: The Game Master.