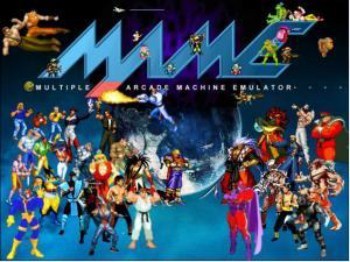 Not to be confused with Auntie Mame.
Advertisement:

MAME is an Emulation suite for Arcade Games. The project (which stood for "Multi Arcade Machine Emulator" until its merger with sister project MESS) aims to faithfully reproduce the games using the original game data, while emulating the hardware on a general-purpose PC. After merging with its sister project, MESS, it also targets the emulation of game consoles, LCD games, old computers, slot machines, plug-and-play game consoles, and more.

The MAME developers focus on accurate emulation (rather then using hacks/cutting corners for speed/being "playable") so MAME can archive the arcade gaming era from the 1970s to the present. The source code also doubles as documentation for the hardware of these old systems. To date, MAME supports nearly 4,000 unique games.

MAME updates roughly every couple of months, and sometimes has "in-between" releases that fix critical bugs. The program can be downloaded from the official website.

Unlike other emulators, MAME uses a unique filename system for their roms (which some emulators that emulate games that are in the MAME database will also use for comparability), and treats them differently as well. For example, Marvel vs. Capcom: Clash of Super Heroes has multiple different files. "mvsc" is the European version, and is the parent rom. If you wanted to play the USA version, that is a child rom called "mvscu", and requires the parent European rom (both roms also require the Q-Sound rom in later versions of MAME as well). Sometimes, as development progresses, older, poorly "dumped" roms might be replaced with newer roms that replace the older roms in newer versions. Even further, BIOS files and CHD files are needed for some games as well.

MAME roms also can be found in split (each parent and clone is separate from each other), non-merged (each rom has other roms it needs to function), and merged (the rom contains the parent rom and each clone rom) varieties. This and the above can usually cause some headaches for those who do not know or are not used to all of this.

Until March 2016 (when the software was relicensed under the GPL and BSD licenses), MAME was distributed under a license prohibiting commercial use of it, though this did not stop many entities from using the program for their own games with usually pirated roms. It's not uncommon to see multi-arcades using MAME software or its variants.