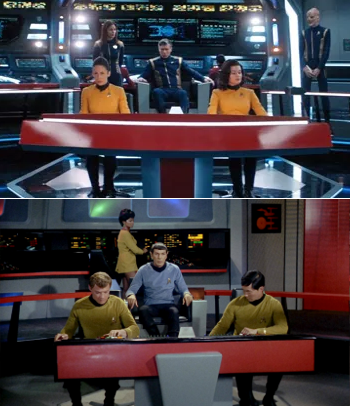 Top: USS Enterprise, 2257. Bottom: Same ship, 2266.
"I have to say, I find these slick computer-generated renderings of the ship kind of jarring; it makes the Enterprise look more technologically advanced than starships will look however many years later, during Kirk’s stint as captain. I’ll admit there’s really no way around that problem (short of dusting off old models from 1950s B-movies), but it’s just one of what I suspect will be many little anachronisms that arise from doing a prequel series."
— The Agony Booth's recap

A game, movie or TV show will come out, and run its course. Sometime later, the same developers, or a new team will decide to create a prequel to the original. Compared to when the original came out, technology has advanced, allowing better graphics, better features, better special effects, etc. However, even though the setting of the prequel is stated to be less "advanced" than the setting of the original, you wouldn't know that from just observing it.

See, this can be a bit of a dilemma when it comes to visual and interactive media, concerning not only prequels, but spinoffs as well. Designers often try to evolve and make their works look better than their previous ones, even when the story they're working on occurs way before their earlier designs. The end result is that their designs for the prequel/spinoff looks or feels better than what they had in the current storyline. That's what this trope is all about.

This is common in prequels to sci-fi works created in the mid 20th century, but whose prequels were done in the late 20th and this century. While the original is rife with outdated technology, the more "primitive" prequel will have tech that looks like it came straight out of an Apple Store (iPod look optional).

The Literary Agent Hypothesis helps suspend one's disbelief when this trope comes into play; that is, the progression of technological sophistication is not arbitrary or backwards, but merely subject to the special effects and budgetary constraints of the modern-day reproduction.

If technology had regressed in-universe in the time between the prequel and the original (for instance, if the original is set After the End and the prequel is set Just Before the End), this trope does not apply.

Compare and contrast with The Aesthetics of Technology, Long-Runner Tech Marches On, Evolutionary Retcon, and Zeerust. May be a specific instance of Older Is Better. See also Zeerust Canon.